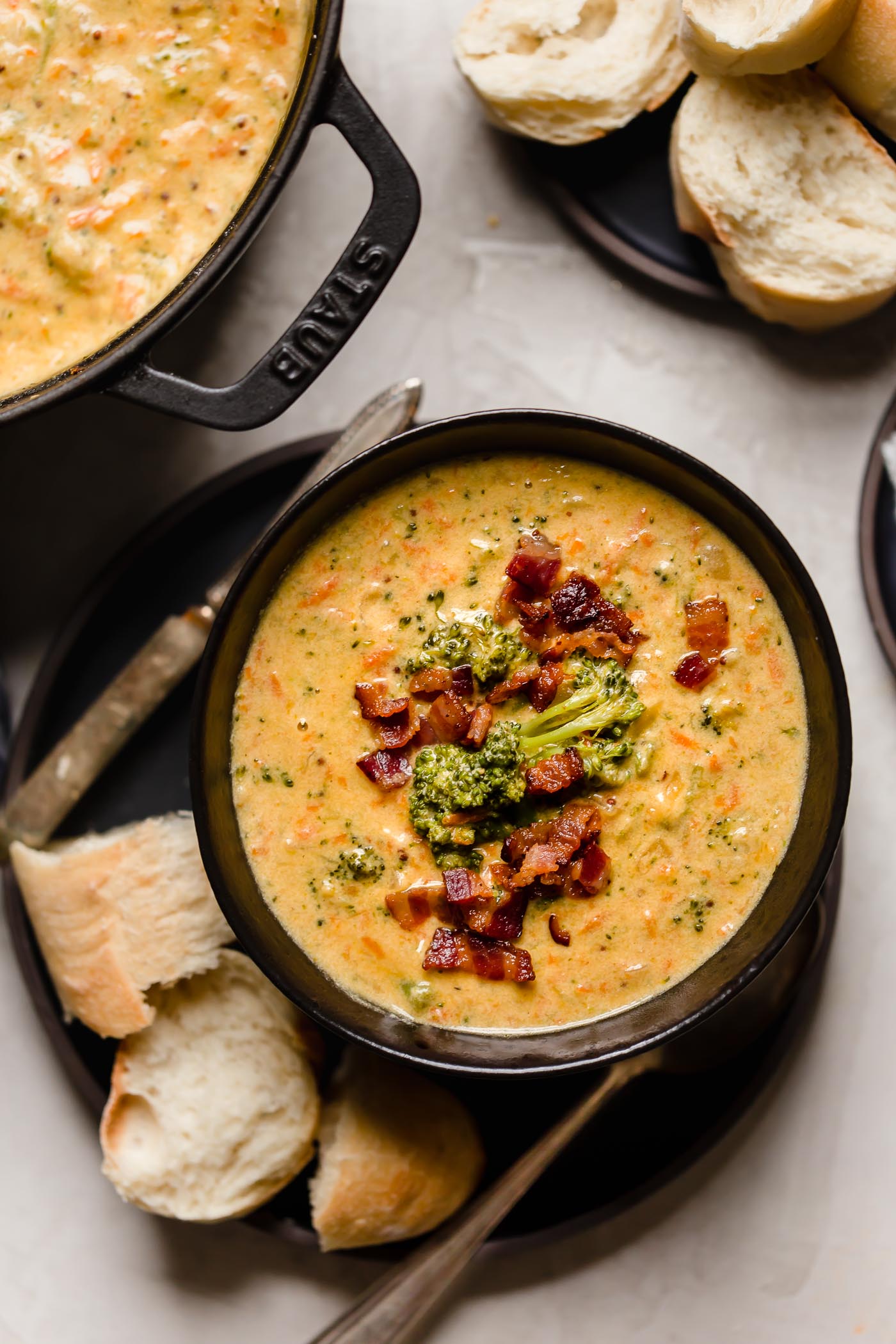 this post is sponsored by Tillamook, whose cheeses have earned a permanent spot in my cheese drawer. all thoughts & opinions are my own. thank you, as always, for visiting plays well with butter & supporting the brands that support this site! ?

…& then we’re adding bacon to the mix. 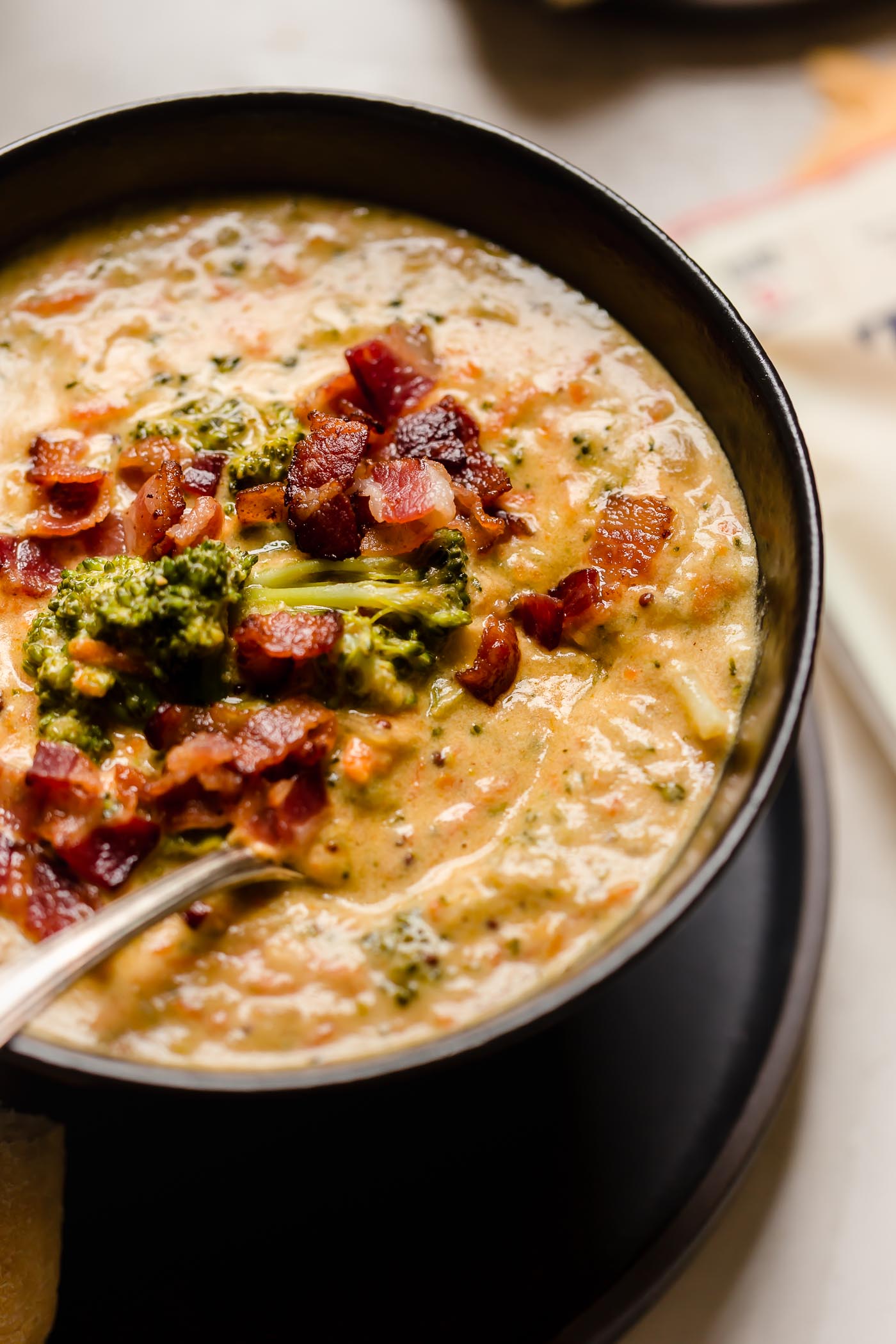 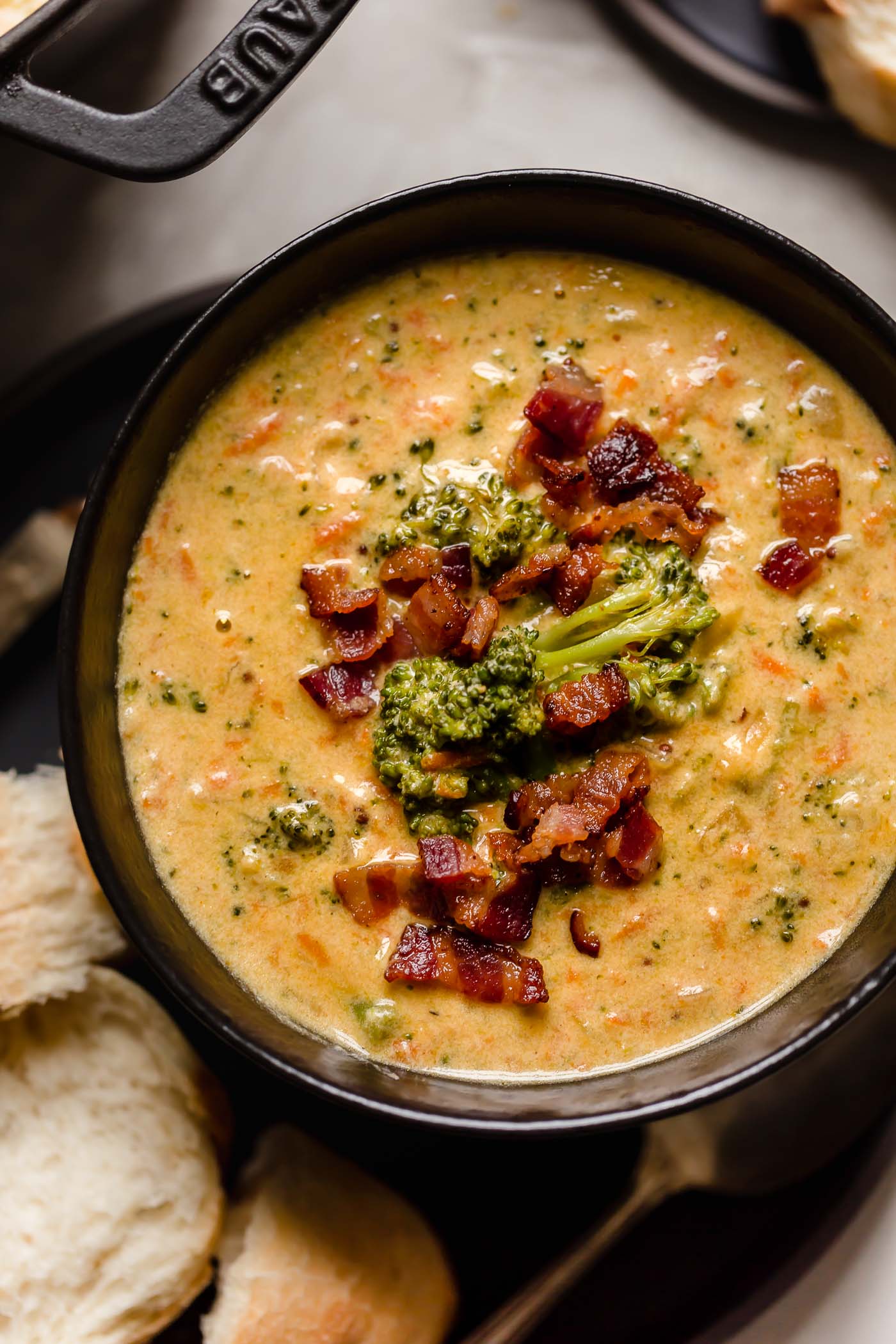 i am pretty sure i could be president of the soup fan club, if such a thing existed. i know some people are very “soup isn’t a full meal” (ahem, chris, ahem), but i am the opposite. as soon as the temps begin to drop in the fall, soup is pretty much all i have on my mind. i could honestly eat soup for every single meal during the cold months. (& more often than not i do meal prep a pot of chili to reheat during the week for an easy, filling lunch!) 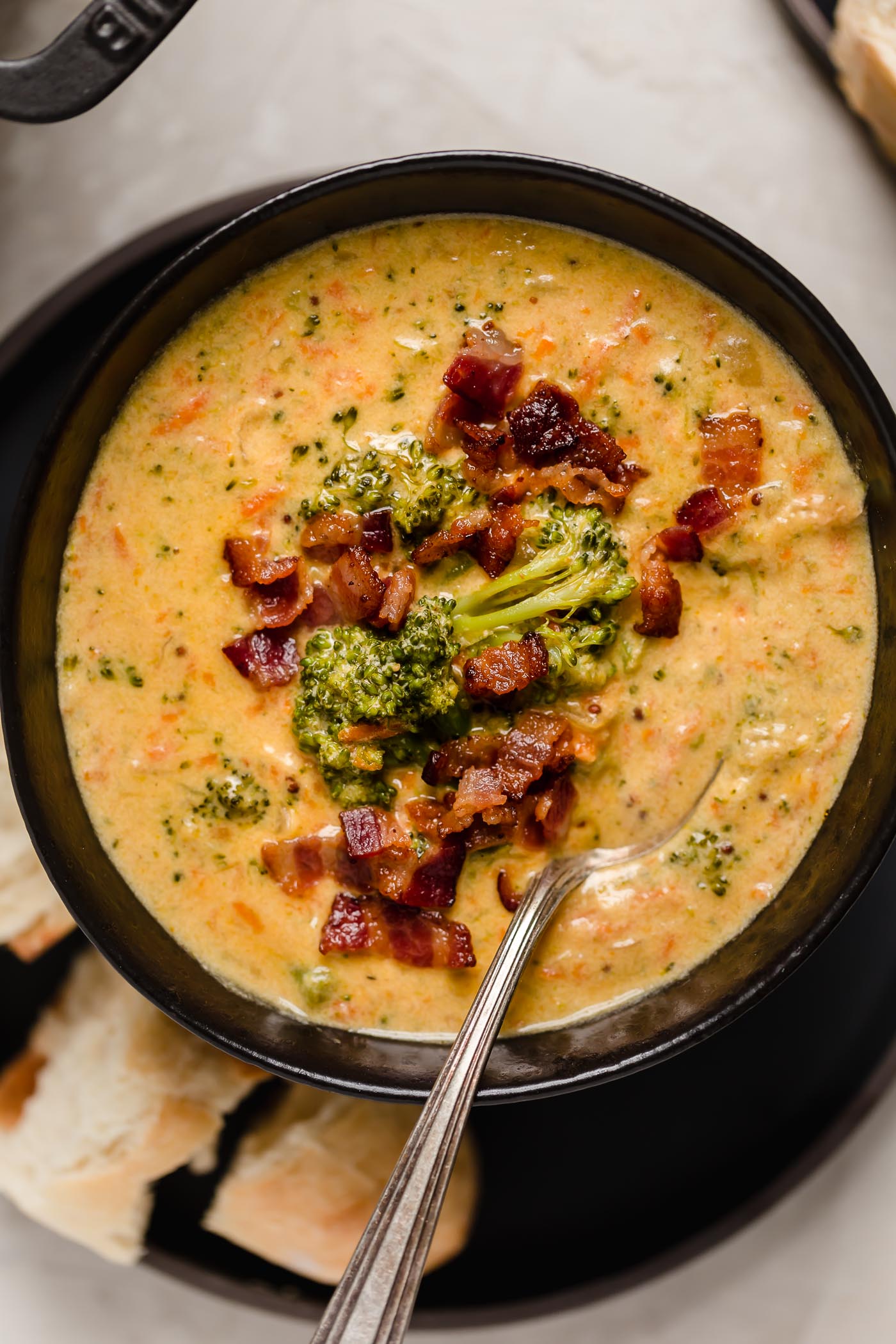 the thought of combining the two first occurred to me a just few weeks ago, on the first really dreary & cold day we had in minnesota this year. my mind wandered to all things soup, which eventually had me thinking about how i could possibly make broccoli cheese soup better than it already is. (i’m telling you, soup daydreams are the kind of thing that only happen to the soup fan club’s strongest presidential contender.)

but it came to me: add beer. & bacon. obviously! 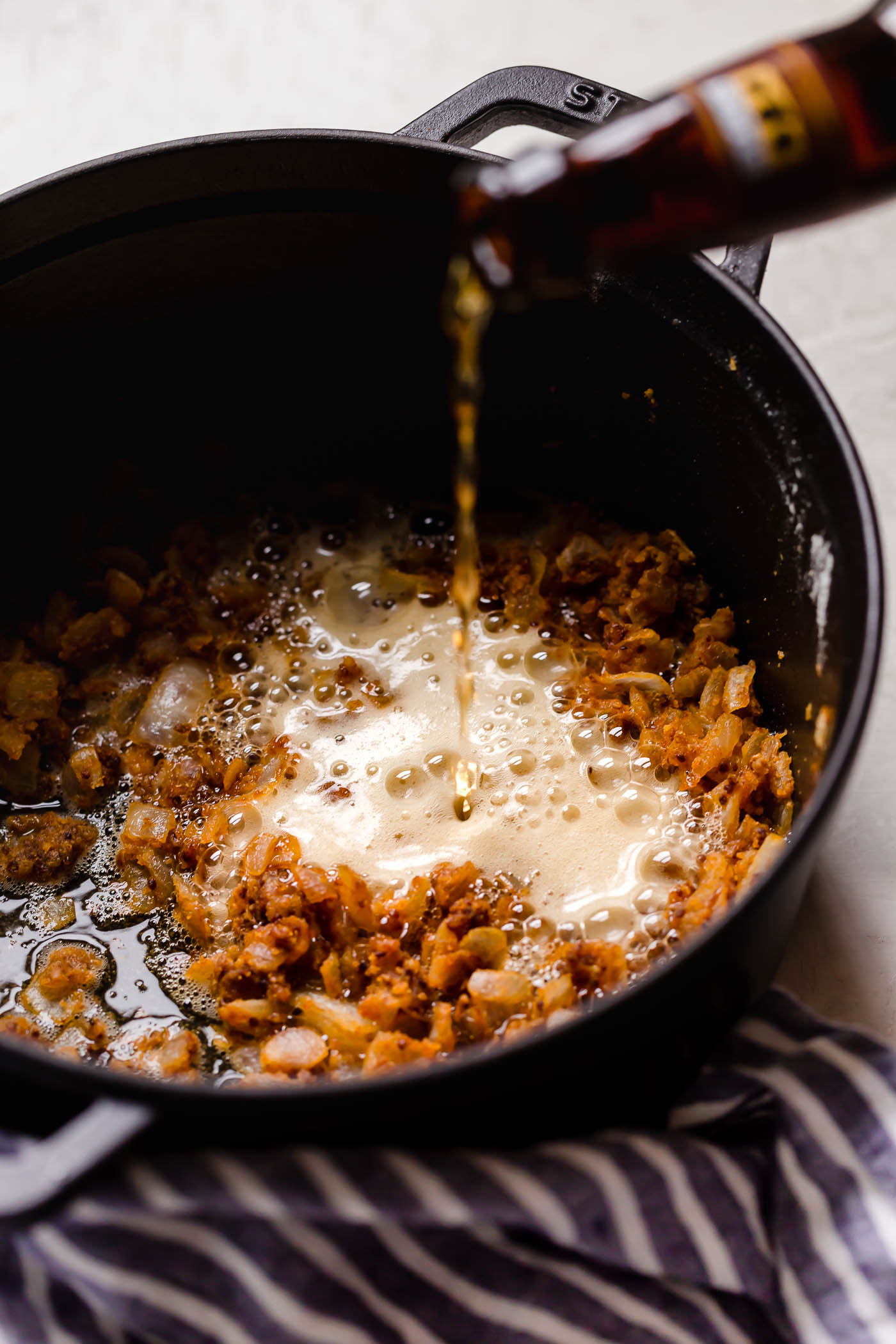 & guys? this bacon beer cheese broccoli cheddar soup is everything (literally EVERYTHING) i’m hyping up to be.

it’s got 3 main layers of flavor: bacon, beer & sharp cheddar (which, i’m pretty sure is the definition of heaven), & they all come together to create the most super duper cheesy, ultra rich & creamy, & totally cozy-comforting soup. it’s so indulgent that it’s definitely not the type of soup you make every single week of the winter, but on the one or two occasions you need an ultra comforting dinner during the cold winter months? you guessed it. bacon beer cheese broccoli cheddar soup to the rescue.

plus, a major bonus…bacon beer cheese broccoli cheddar soup is really easy to make on any night of the week. 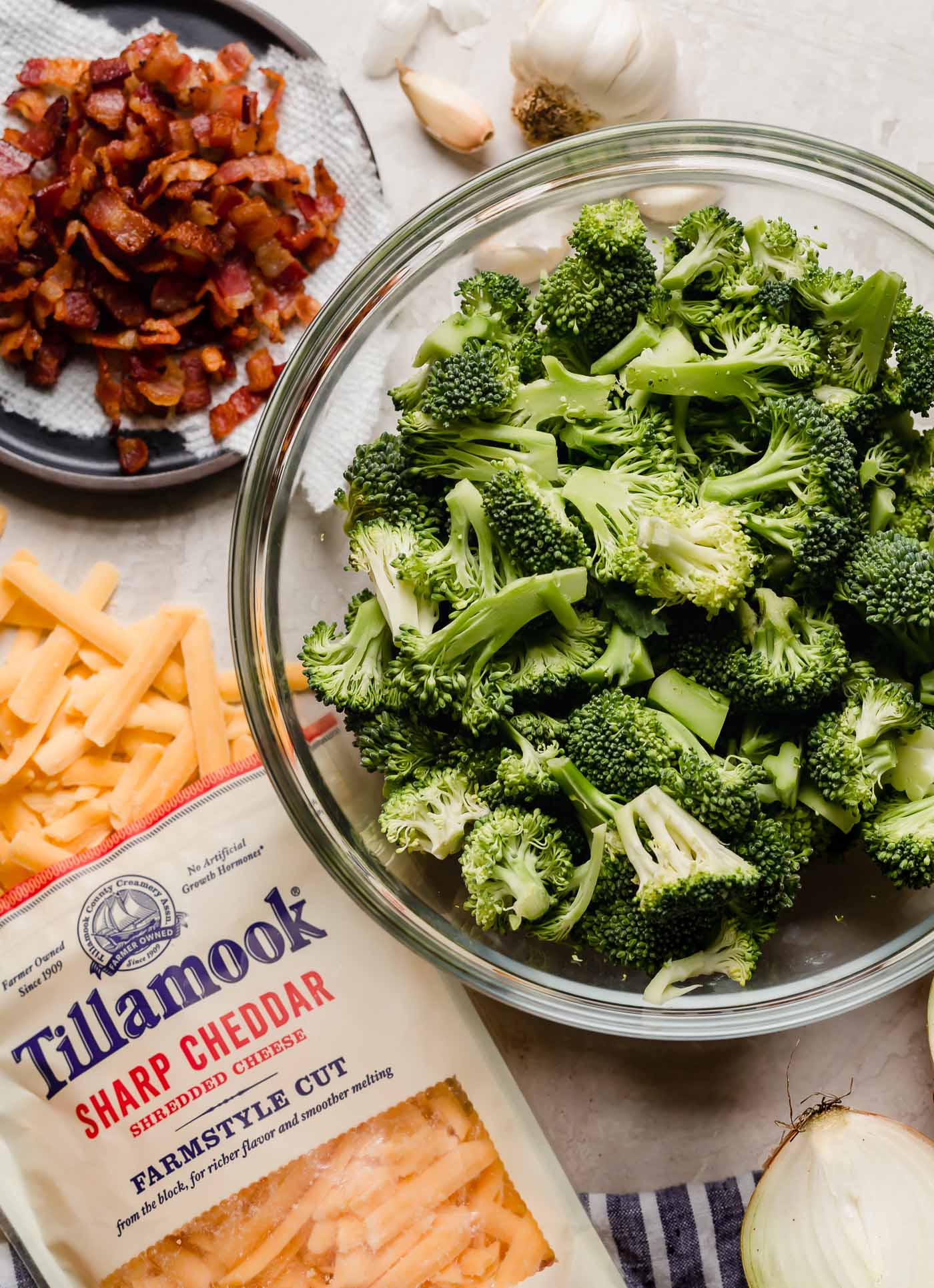 just like making any soup from scratch, bacon beer cheese broccoli cheddar soup has a few steps involved. coaxing major flavor out of all of the ingredients takes a little bit, as it should! but, this bacon beer broccoli cheddar soup recipe is really easy to make & there’s some downtime between each step, so you can get some other things done while dinner simmers away to creamy, luscious perfection.

first up? frying up some bacon. 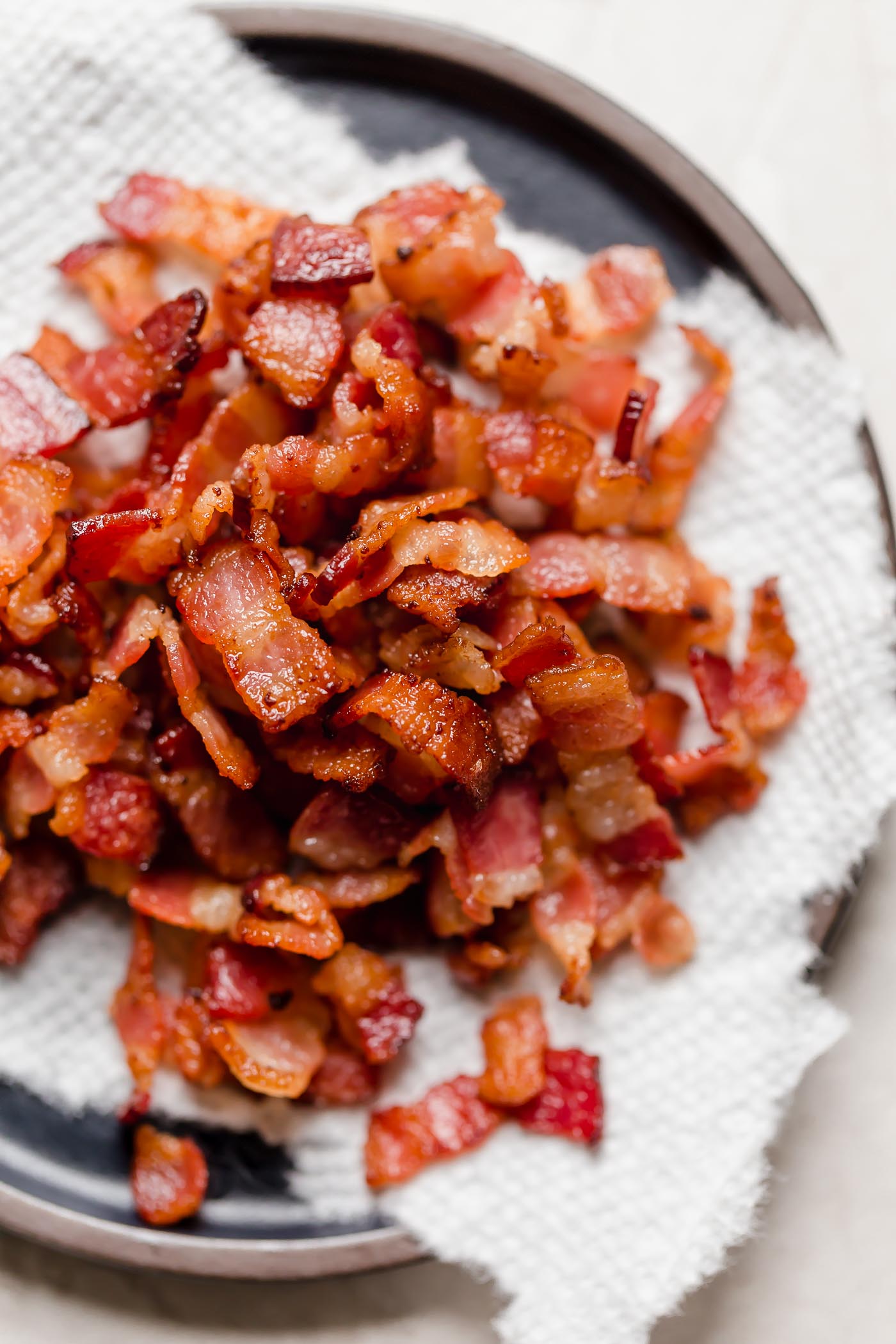 this is totally optional, but definitely encouraged since the bacon plays double-duty to add flavor to this bacon beer cheese broccoli cheddar soup. it’s not only a garnish to sprinkle on top of your bowl of soup (along with a handful of cheese, of course), but the onions & garlic that make up the base of bacon beer cheese broccoli cheddar soup get cooked in bacon fat. 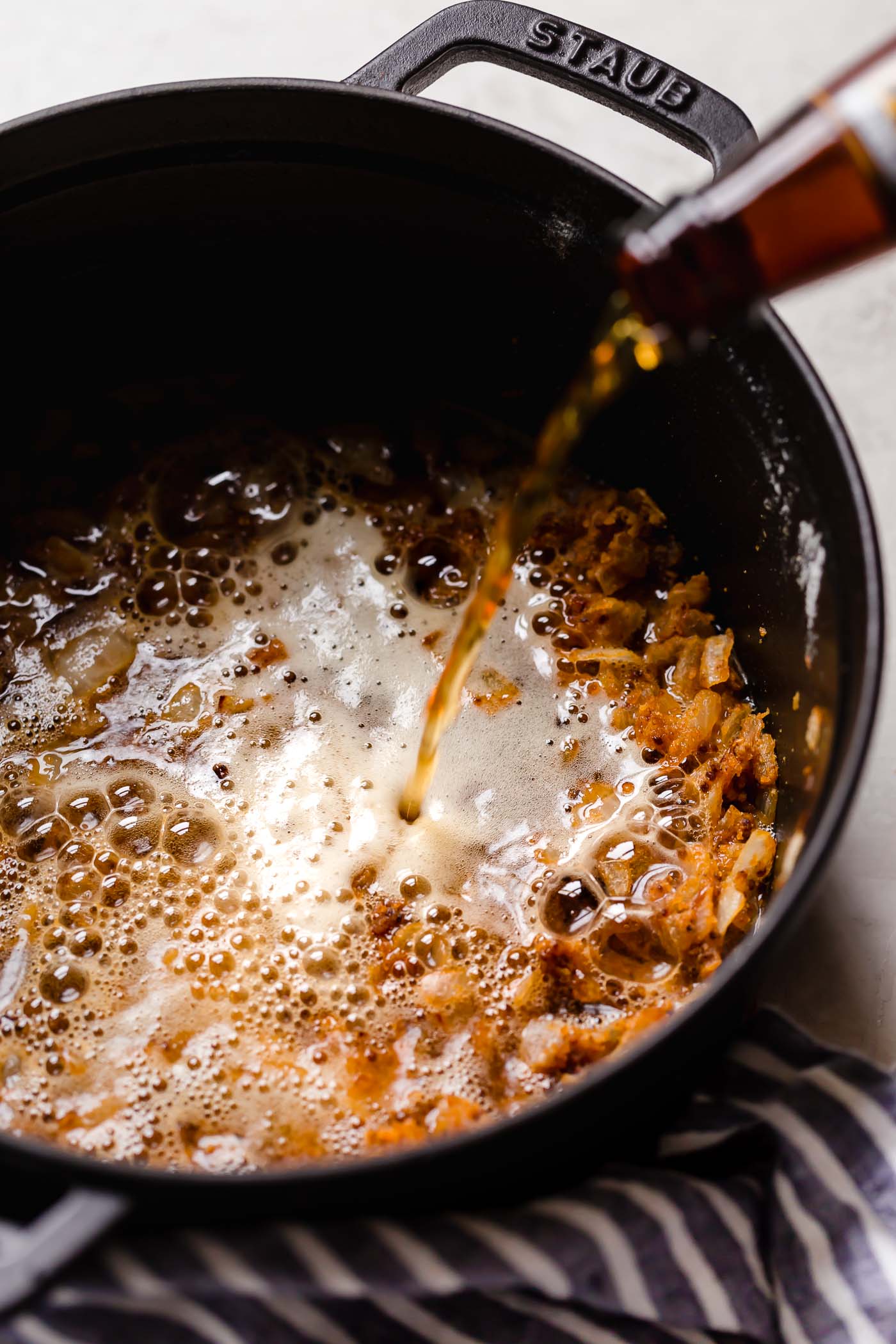 next up? make a roux, which is essentially fancy-speak for the combination of fat + flour that’s at the base of almost every creamy sauce or soup you could possibly make.

you’ll sprinkle some flour over the onions & garlic, which have been sizzling away in the bacon fat, & let it cook for 1-2 minutes until it’s pretty deeply browned (brown roux = major flavor) before pouring in the beer.

when it comes to beer, i’ve tested this recipe with both lighter & darker beers. while i’m usually on team light beer, a darker beer, like an amber or porter, definitely shines through in this soup! you can obviously use whatever beer you love, but the flavor of lighter beers (lagers, IPAs) definitely mellow out once the broccoli & cheese were added into the soup. 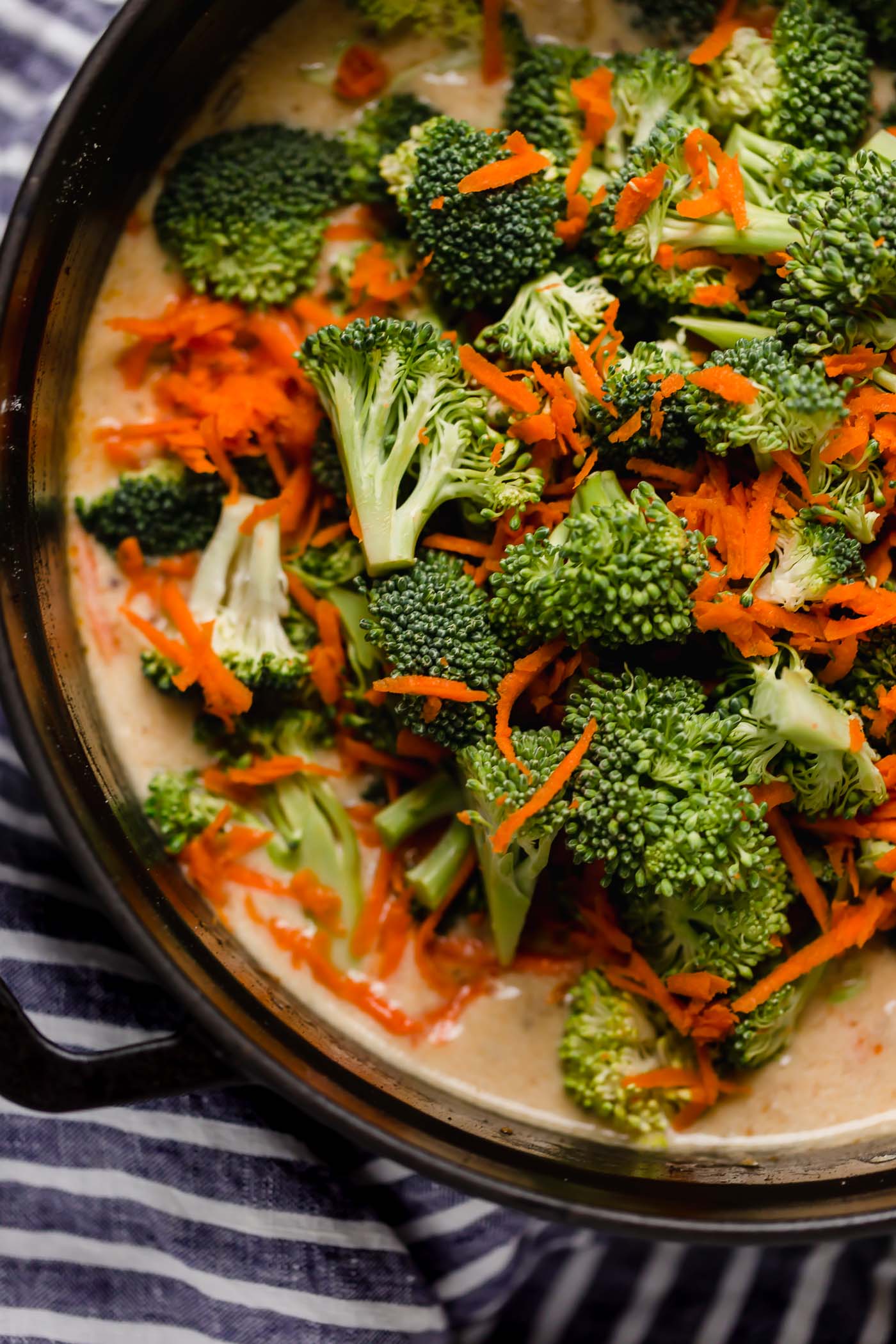 you’ll add some chicken stock & milk (…or cream) to the mix & let everything simmer together for about 5 minutes before tossing in some broccoli & finely shredded carrots. & once they’ve had the chance to soften up, in comes the star of the show… 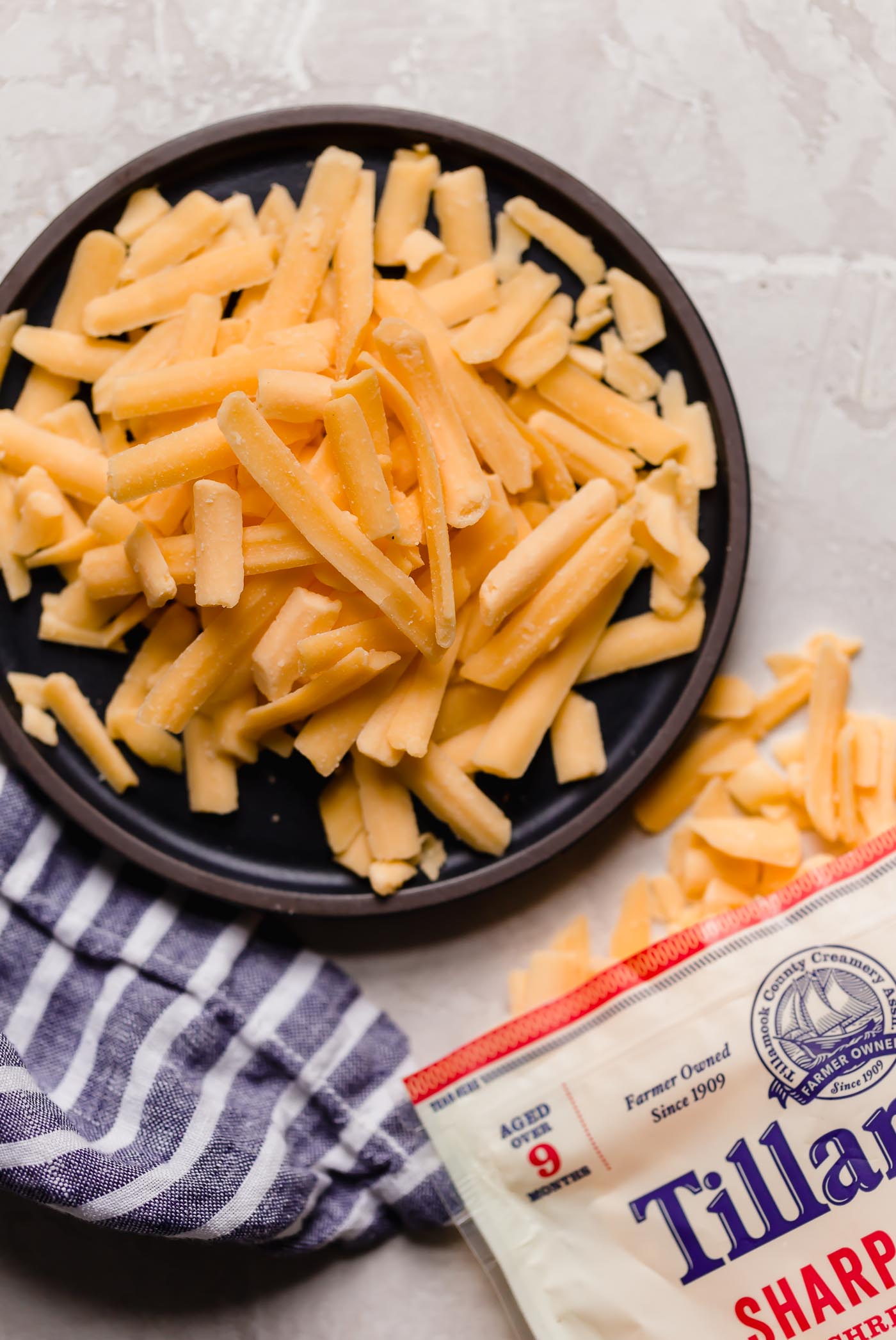 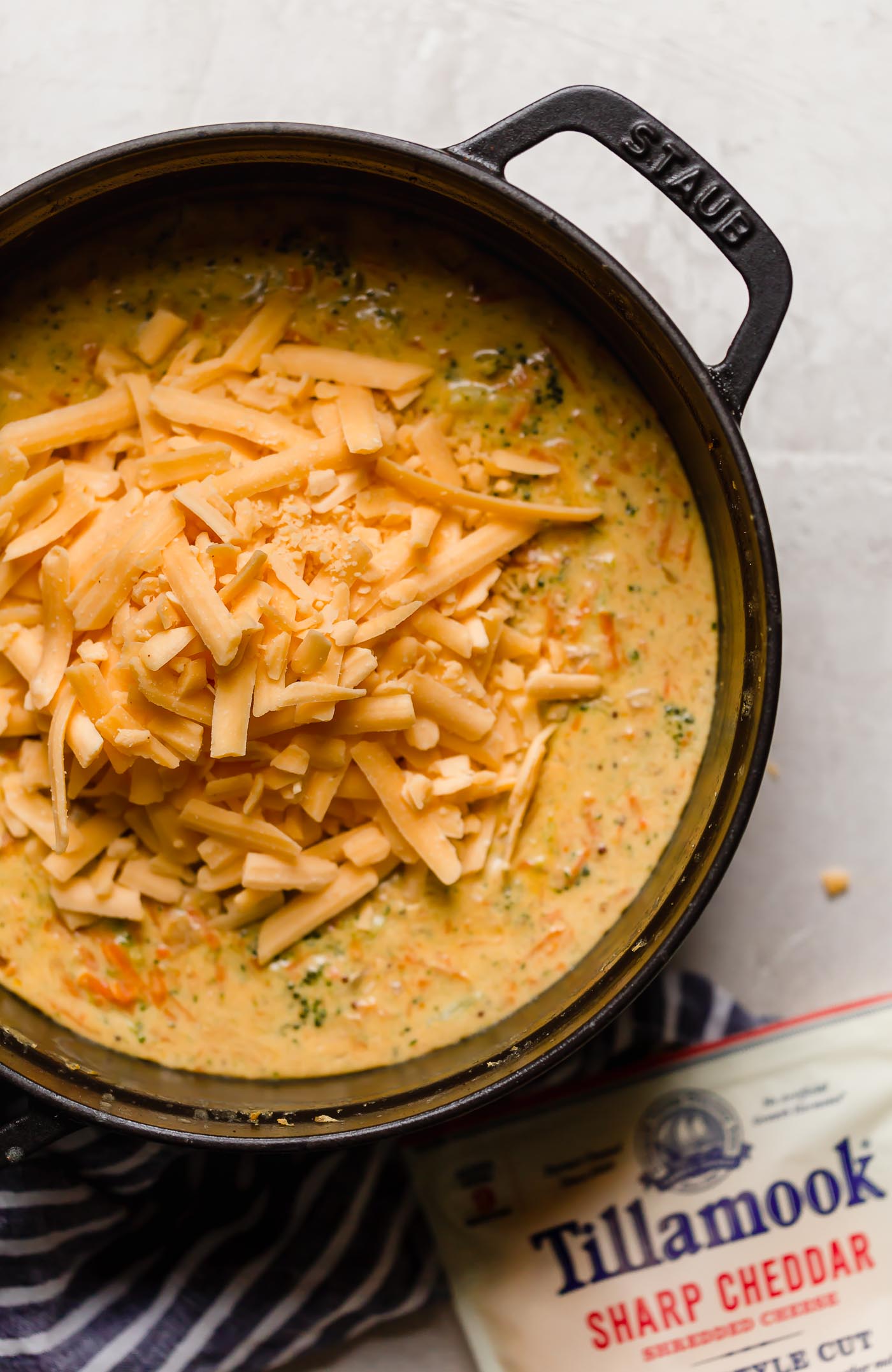 specifically, Tillamook Farmstyle Cut Sharp Cheddar Shredded Cheese. if you guys haven’t tried Tillamook yet, you must. i’ve been absolutely obsessed with them ever since they expanded to the midwest & east coast earlier this year.

not only are their cheeses all absolutely delicious & made from super high quality milk, the Tillamook shredded cheese is INSANELY good. the farmstyle cut of their shreds is larger than many other shredded cheeses. plus! Tillamook takes the melt factor very seriously, which is something this cheese lover can totally appreciate. Tillamook Farmstyle Cut Sharp Cheddar Shredded Cheese melts evenly & smoothly, which is actually pretty hard to find in a good sharp cheddar.

& that golden combination of meltiness & flavor absolutely takes this bacon beer cheese broccoli cheddar soup to the next level. 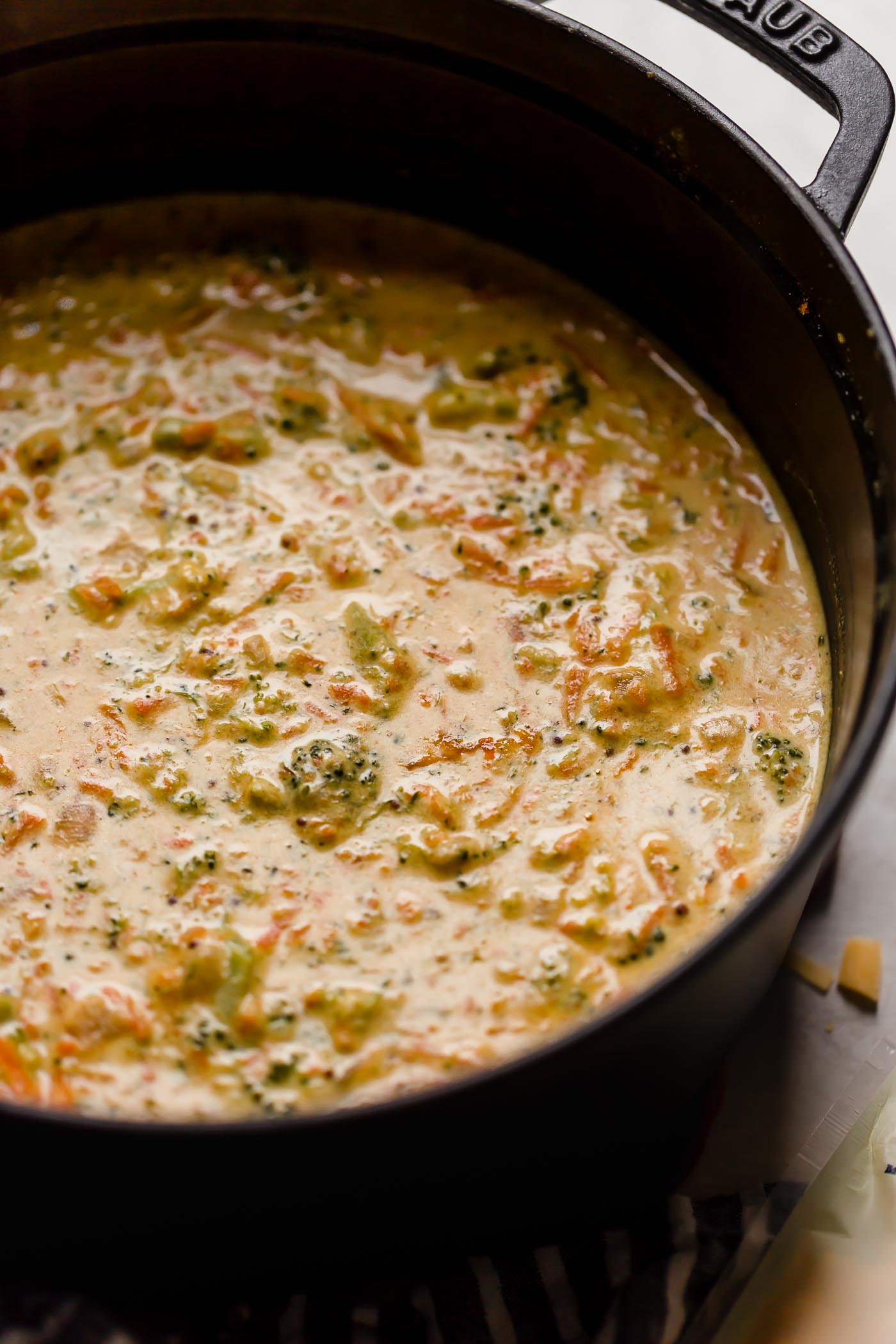 last but not least? you dive on in to your warm & cozy bowl of beer cheese broccoli cheddar heaven, obviously. 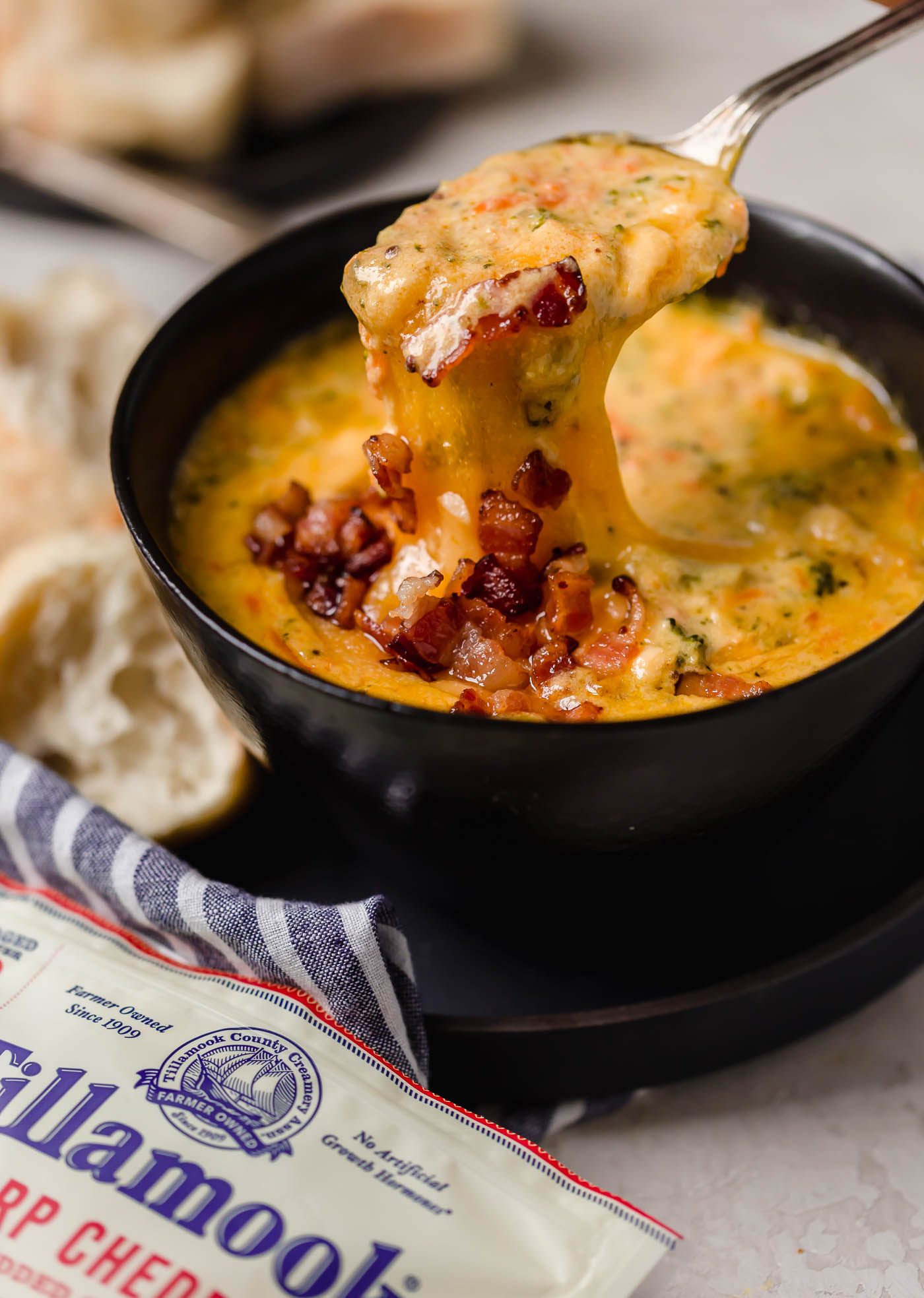 if you loved this bacon beer cheese broccoli cheddar soup recipe, here are a few other comforting recipes you’ll love!

thank you so much for reading & supporting plays well with butter & the companies i partner with to keep bringing you great original content. i only feature brands & products i truly love & use on the reg in my own home. all opinions are always my own!  ??? 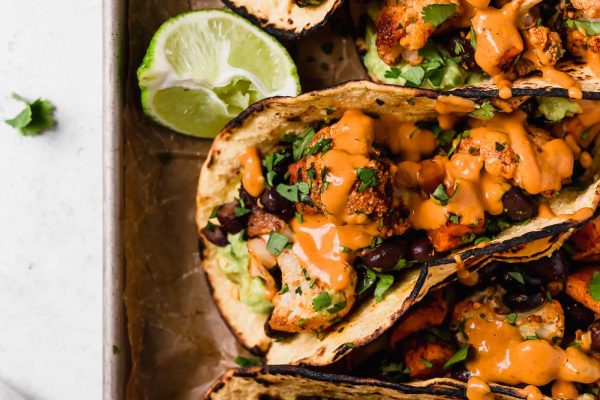 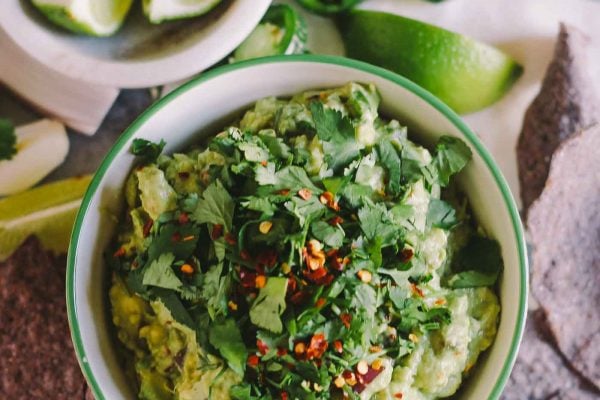 the best guacamole ever. (period.)

A foolproof, restaurant-worthy method to making the best guacamole at…
Read More

I don't know about you, but I am feeling so ready

Merry Christmas Week!!! Whether you need a Christm

Every year Chris & I have a cozy holiday date nigh

This error message is only visible to WordPress admins

Error: API requests are being delayed for this account. New posts will not be retrieved.